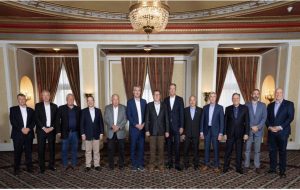 This photograph makes me angry. Fifty point three percent of all Canadians are women, so why don’t we see more women in this picture?

In the last federal election 98 (29%) elected seats out of a total of 338 seats in the House of Commons were held by women and fortunately, under the Trudeau government, the Ministry Cabinet has had gender parity since 2015. The three top ranking countries for the percentage of women in national parliaments are Rwanda, Cuba and Bolivia. Here in Canada, we still have a long way to go: we rank 58th.

According to research, only 27.1% of leadership positions are held by women across the globe and this number has not significantly changed over the past 27 years. The International Labour Office (ILO) reported that “progress in closing the gender gap has stalled, and in some cases is reversing.”

Why aren’t women leading the way?

There are various reasons, but two important ones are the motherhood penalty and societies’ gender biases.

Worldwide, women with young children have a lower employment rate, lower wages and lower participation in leadership positions. This is known as the motherhood penalty. Here in Canada, women still do 30% more unpaid work in the home than men. Consequently, women need to find work-life balance and prefer to have part-time work (in Canada 75% of part-time workers are women) so they can juggle their family life and their career. Mothers find it difficult to be in leadership positions. I concur. I only began my Master’s in Education after one of my two sons was in high school and moved into a leadership position when both boys were teenagers and more independent. To compound this, childcare in Canada is very expensive with an average cost of 35% of the family income.Quebec is the exception and introduced low cost subsidized childcare in 1997. Research suggests that since the program was implemented, more women have joined the workforce, the government has raised its revenue through increased taxes and lower transfers (the program actually pays for itself), and the poverty rate has declined. I’ve always questioned why other provinces don’t have a similar program.

A bias is a conscious or unconscious tendency to discriminate. Gender bias is a preference or prejudice towards one gender over another. Since there are more men are in leadership positions, they are viewed as leaders. In an experiment, participants were asked to draw a picture of a leader and both men and women almost always drew a man. Men are perceived as self-confident and capable of making decisions, whereas women are perceived as nurturing and kind. I remember the first few times I was at a committee table (in front of mostly men); I would speak to a subject with passion and confidence and yet I was perceived as aggressive. The men in the same context were perceived as powerful. These are difficult stereotypes to break. According to research, women that attain leadership positions are seen as lucky in contrast to men who are seen as skilled. Personally, I always feel that I have to be more prepared and work much harder in order to be respected. I’ve also had to change my tone, so that I won’t be perceived as aggressive. Unfortunately, according to a recent United Nations study, these biases are actually worsening.

Why should women be at the table?

Firstly, it is important that leaders reflect the electorate or the organization that they represent. Seventy-five percent of teachers are women, therefore, we should see the number of leaders in education (school administrators, school board administrators, union leaders, board members, etc.) reflect this number.

Secondly, women bring a different perspective to the table and they place a higher priority on equity issues and rights for women and children. In other words, when there are more voices, opinions and perspectives at the table, it’s good for everyone.

In addition, it’s good for the economy. A 2017 report shows that companies with gender, racial and/or ethnical diversity have financial returns that are above average. In 2003, Norway introduced a quota law that requires companies to have 40% women on their board of directors. The result was that boardrooms became more diverse (even beyond gender), more dynamic, more innovative and more effective.

How to encourage women into leadership positions?

During the March break, I had the privilege of being one of the two keynote speakers at the 2020 Manitoba Teachers’ Society’s Women’s Symposium to discuss women in educational leadership. I was sitting with Anne Mahon, Chancellor of the University of Manitoba and Jen Zoratti, a columnist and member of the editorial board of the Winnipeg Free Press who was designated as the moderator. What stood out in the conversation is that teachers already have leadership qualities and that women need to have confidence because they are qualified. Both Anne and I felt that it was important to be authentic and truly believe in what we were doing.

I also truly believe in mentorship and sisterhood. It’s important to support and empower each other. Women can be hard on themselves and even harder on each other. So, let’s be kind to one another. 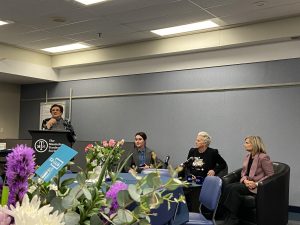 As a union leader, part of my role is to encourage other women to get involved. When society sees more women in leadership roles, biases will change. This can translate into women perceiving themselves as capable and changing the way society sees leadership.

So, to all the women out there that are contemplating moving into a leadership positions, I say: “You are qualified! Find your voice and speak up!”