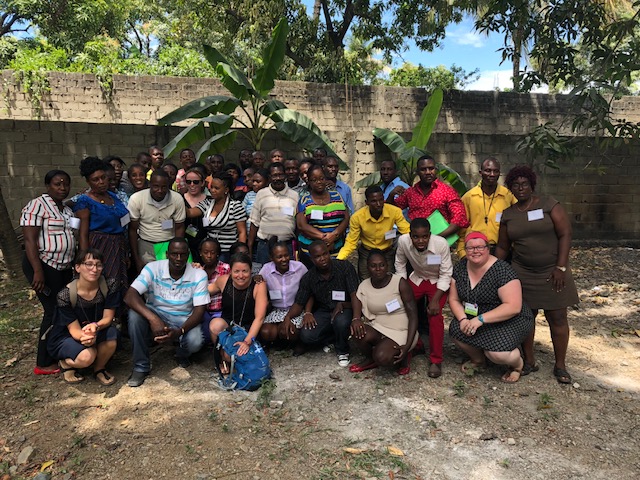 Each year, the Canadian Teachers’ Federation sends, as part of Project Overseas, about 60 English and French-speaking elementary and secondary school teachers as volunteers to various African and Caribbean countries. The selected individuals are part of a team working with a group of trainers from a developing country to provide professional training for local teachers in different subjects and to promote literacy, gender equality and peace education.

In 2014, I was part of Project Overseas in Togo, West Africa, with two colleagues from Alberta and one from Ontario. I saw firsthand how different the working conditions of our Togolese colleagues are from ours. Yet, we share a common interest: to provide quality education for our students. Visiting a school, interacting with teachers and acknowledging each other’s context and difficulties allowed us to discuss realistic ideas and strategies.

The Project Overseas assignment in Togo was thus not only a learning experience for Togolese teachers, but also for us, the Canadian teachers. Above all, we realized that our presence made a difference, and that’s why I sent in my application to participate in the 2018 Project Overseas.

The Quebec Provincial Association of Teachers (QPAT) sent my application to the Canadian Teachers’ Federation, which selected me as team leader. My team members were a teacher from Winnipeg, one from Ottawa and one from Charlottetown. We traveled to Haiti last July. Our team’s objective was to work with Haitian co-instructors to provide professional training to 120 teachers from the National Council of Haitian Educators (CNEH) in the northern Cap-Haïtien region. Our mandate was to offer joint strategies for teaching mathematics, French, science and classroom management.

We arrived in Port-au-Prince on July 5 and spent the next day traveling to Cap-Haïtien, which is about seven hours from the capital. We had a chance to enjoy the gorgeous landscapes, the sea as well as the mountains, and to greet the inhabitants of the towns and the countryside. We also learned a lot about history and culture from Moïse, our guide, interpreter, driver, bodyguard and friend. The Haitians welcomed us warmly, always saying, “Welcome, this is your home!” Our well-being and safety were their priority at all times.

As we were making our way north, the government announced its decision to increase the price of gas by 38% and the price of diesel by 47%, a condition imposed by the International Monetary Fund in exchange for their continued support. As can be expected, the population reacted strongly to this news, in a country plagued by perpetual poverty and constantly recovering, as best it can, from one natural disaster after another. As we headed north, slowly but surely, on rickety roads in the middle of nowhere, we quickly realized that something was wrong… When we arrived in the city of Cap-Haïtien, some roads were partially blocked by burning tires.

We had heard in the media that demonstrations were raging in Port-au-Prince. However, this did not prevent us from getting on with our work at the Public University of the North in Cap-Haïtien. Despite the sometimes unbearable heat, our 60 participants were enthusiastic and actively involved. We worked with primary school staff, teachers with classes ranging from 50 to 80 students, some of whom had not been paid for weeks or even months. Every day, we gathered feedback from participants, while being receptive to their needs and situations. We wanted to offer them realistic and achievable strategies.

Then, as protests continued, we learned that the Canadian Embassy was closing its doors, flights from Haiti were being cancelled and the Dominican Republic was closing its borders. We also heard that the return route between Cap-Haïtien and Port-au-Prince was blocked. Trucks and United Nations (UN) forces were seen in the city. Throughout this time, the Canadian Teachers’ Federation was closely monitoring the situation and was in constant touch with our team. On our second day of work, we were told that, for security reasons, we had to be repatriated to Canada the next day. We didn’t even have time to say goodbye to the participants. That same evening, we had to announce our departure to our co-instructors. We were all saddened to have to end a project that had started so well. We were overwhelmed with guilt about fleeing the political crisis and abandoning our Haitian friends and colleagues who did not have the chance to do so…

We left from the small airport of Cap-Haïtien. Saying goodbye was not easy. On the plane to Miami, we read the comments of the participants, who had left us messages full of gratitude and admiration and praised our work. And yet, day after day, they manage to teach in overheated and overcrowded classes, with little or no resources, to children who are often hungry. I didn’t have time to tell them how much I admire them.

I would like to thank QPAT for supporting, year after year, Project Overseas. Teachers who have had the privilege of participating in the project have the opportunity to share what we do well at home with colleagues in developing countries. They experience resilience, courage, generosity, solution seeking and richness of heart in a completely different way. By supporting the CTF’s Project Overseas, QPAT contributes not only to professional training in developing countries, but also, and above all, helps its own members receive a charge of humanity.